From time to time, I build kits from other makers and share my feedback. It's a great experience, and every maker's kits are elevated by the experience of trading information about how they assemble.

We all approach instructions differently, and solve some of the making problems with differing talents. Instructions are often difficult to make and difficult to follow, so any advancement in this realm is a benefit to everyone. For instance, I include tiny instructions with Tinysaurs, naturally, so I put 3D instructions online in an effort to clarify some questions I was receiving about assembly.

Ronald Nelson of Induku Design makes amazing wood items. I got his Strandbeest and his Schrödinger's cat in a box. (My wife has asked me to put a spot of glue on the cat so that we can preserve the uncertainty.) His version of the Strandbeest is amazing and elegant. He has a great write-up of his development process and the original giant creation by Theo Jansen here.

The arrangement of gears creates a massive amount of torque from wind or finger power to overcome the imperfections of my assembly. I've attempted to make many all-wood mechanical laser cut things over the years, but have been unsuccessful without smooth machined parts. Ronald's Strandbeest kit has inspired me to keep trying. 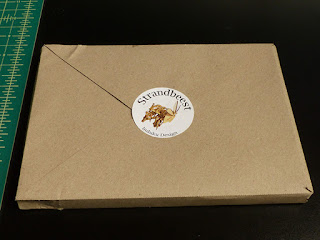 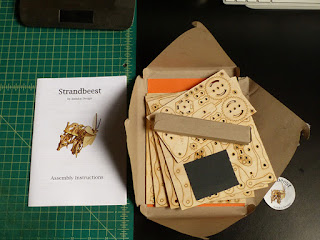 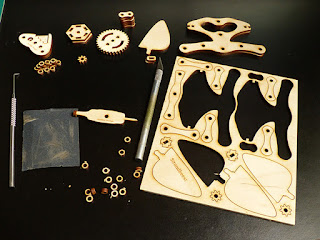 Separating pieces and sanding the sprues. 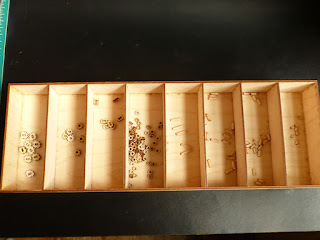 I put all the small parts into a tray. A pill diary or some small bowls would work too. 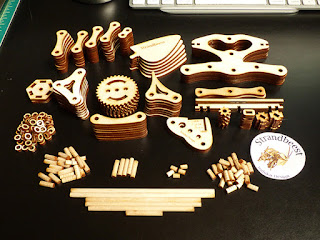 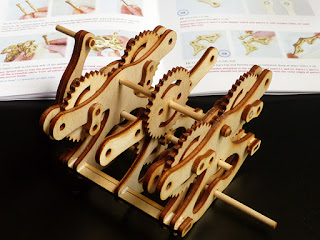 Gear train complete. It's really cool to work the axels at this point. 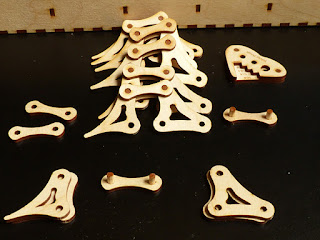 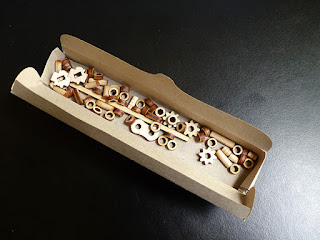 Lots of spare parts in case you drop one under somewhere or break one. 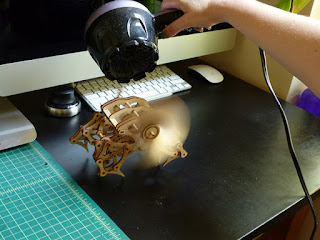 (H)air power! Strandbeest likes hair driers.
Posted by POTUS31.com at 10:41 AM No comments: Links to this post

More than double in 24 hours. Thanks! 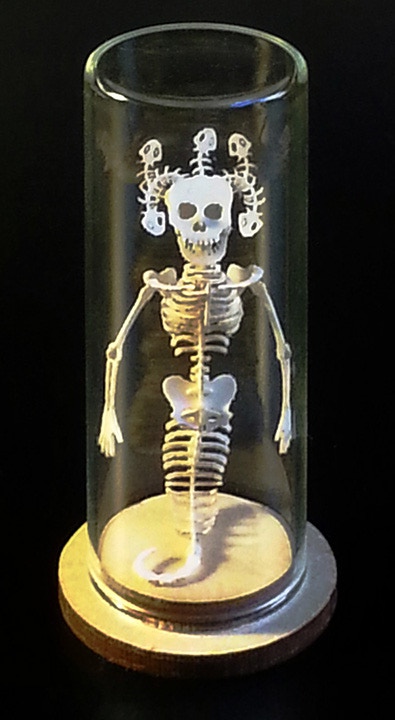 Thanks for helping us make double our Kickstarter goal!

We've finished the Medusa prototype and have added the first stretch goal of $5,000. Your help has been wonderful. We still have 26 days to go in the campaign and several stretch goal ideas, so please keep sharing the project! 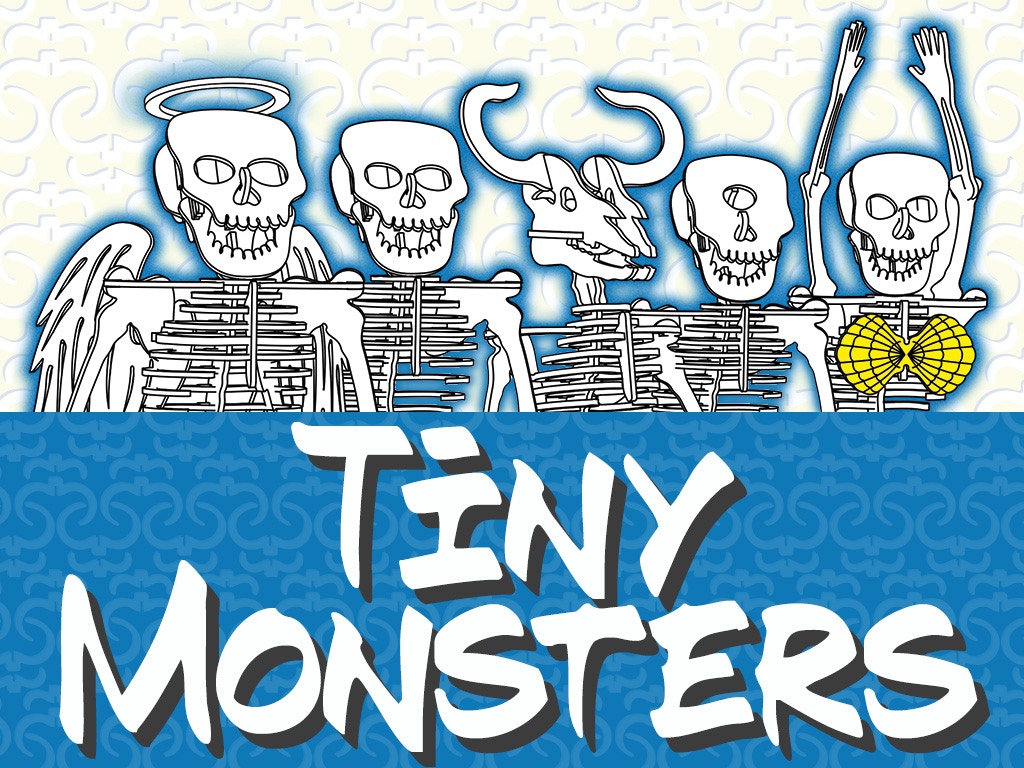 Posted by POTUS31.com at 7:01 PM No comments: Links to this post

Email ThisBlogThis!Share to TwitterShare to FacebookShare to Pinterest
Labels: Kickstarter

Scientists have described what they say is the first known fossil of a four-legged snake. The limbs of the 120-or-so-million-year-old, 20-centimeter-long creature are remarkably well preserved and end with five slender digits that appear to have been functional. Thought to have come from Brazil, the fossil would be one of the earliest snakes found, suggesting that the group evolved from terrestrial precursors in Gondwana, the southern remnant of the supercontinent Pangaea. But although the creature’s overall body plan—and indeed, many of its individual anatomical features—is snakelike, some researchers aren’t so sure that it is a part of the snake family tree.

The team’s scientific interpretation may be the least controversial aspect of the discovery, which they report online today in Science. The specimen’s provenance seems to be murkier than the silty waters that once buried its carcass. Whereas the team’s analyses strongly suggest the fossil came from northeastern Brazil, details of when it was unearthed and how it eventually ended up in the German museum where it now resides remain a mystery. Those details matter to many researchers and especially to some from Brazil, because it’s been illegal to export fossils from that nation since 1942.

Aptly, the new species has been dubbed Tetrapodophis amplectus. The genus name, in Greek, means “four-footed serpent.” (Previously, fossils of creatures considered to be protosnakes have only sported one set of limbs, usually hindlimbs.) The species name amplectus, which comes from Latin, means “embracing” and refers to the creature’s flexibility and presumed ability to wrap tightly around its prey. The front part of the fossil—which appears to be complete and has all bones in their original, lifelike arrangement—lies in a tight coil, a demonstration of the animal’s extreme limberness, says Nicholas Longrich, a vertebrate paleontologist at the University of Bath in the United Kingdom and co-author of the new study. Besides the tiny limbs, the specimen sports a skull the size of a human fingernail, 160 spinal vertebrae, and 112 vertebrae in the tail.

The fossil had resided in a private collection for several decades before it gained the attention of team member David Martill of the University of Portsmouth. He stumbled across the specimen during a field trip with students to Museum Solnhofen in Germany. No notes about when or where it was collected are available, the researchers say. But certain characteristics of the limestone that entombed the fossil, as well as the distinct orange-brown color of the bones themselves, strongly suggest it came from a particular area of northeastern Brazil, Longrich says. The sediment that became those rocks accumulated in calm waters on the floor of a lake or a lagoon sometime between 113 million and 126 million years ago, he notes.

Many features of Tetrapodophis point to its snakiness. Among squamates, the group of reptiles that also includes lizards, only snakes have more than 150 spinal vertebrae, the researchers note. The creature’s teeth are pointy and slightly curved. Also, the fossil includes some scales that stretch across the full width of the belly, a trait known only in snakes. The dramatically reduced size of the creature’s limbs, as well as a cylindrical rather than a flattened tail, suggest that snakes evolved from terrestrial animals that burrowed, not from marine creatures as some researchers have proposed, Longrich says.

Read more here
Posted by POTUS31.com at 6:53 PM No comments: Links to this post 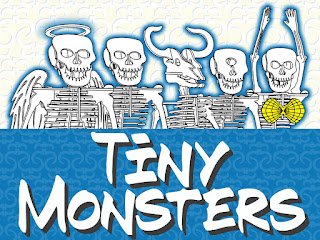 We just launched our second Kickstarter campaign to help us bring you more tiny humanoids.
Posted by POTUS31.com at 12:10 PM No comments: Links to this post

Scientists studying dinosaur evolution are finding many more bones to pick.
Researchers from London have found hints of blood and fibrous tissue in a hodgepodge of 75-million-year-old dinosaur bones. These fossils had been poorly preserved. That now suggests residues of soft tissues may be more common in dino bones than scientists had thought. Details appeared June 9 in Nature Communications.

Scientists are excited at the idea that soft tissues might still exist in most dinosaur bones. It would give them the ability to study these long-extinct animals at the cellular level. And such studies could reveal when dinosaurs switched from being cold-blooded to warm-blooded creatures.

Matthew Collins is an expert in the study of ancient proteins at the University of York in England. (Proteins form the basis of living cells, muscle and tissues. They also do the work inside of cells.) Until now, scientists had thought that traces of soft tissue from dinosaurs remained only in really well-preserved fossils. “It’s exciting to think that we may have more soft tissue in dinosaur bones kicking around,” says Collins, who was not involved in the new study.

Susannah Maidment is a paleontologist at Imperial College London in England. She was part of a team that has just found residues of soft tissue in slivers of eight dinosaur bones. These included a toe claw from a theropod. There also was a rib from a duckbilled dinosaur. All had been found about a century ago, mostly in Alberta, Canada. Since then, the bones had been stashed in drawers at the Natural History Museum in London.

The team used a scanning electron microscope to study the bones. This special microscope can highlight features that are just a few billionths of a meter across. The dinosaur bone images revealed what appeared to be red blood cells. A second type of powerful microscope probed the structure of some bone features. These images showed bands similar to patterns formed by collagen in animal bones today. Collagen is a fibrous protein. It is found not only in bones, but also in cartilage, tendons and other connective tissues.


More on this story here
Posted by POTUS31.com at 1:44 PM No comments: Links to this post

In the late winter of 1976, the world famous fossil collector James Kitching was doing a survey near South Africa’s border with Lesotho.

To his surprise he found a tiny clutch of six fossilized eggs along the side of the road at a place known as Rooidraai.
It took five years for skilled palentologists to remove enough rock matrix from the eggs so that they could be preliminarily identified as the first dinosaur embryos from South Africa and the oldest dinosaur embryos in the world.

Research on dinosaurs has truly blossomed in the 40 years since Kitching’s extraordinary find and a great deal more is now known about the baby dinosaurs in the eggs. But the exceptional secrets they hold are only now being fully uncovered because of developments in technology. This month the eggs were flown to Grenoble, a city at the foot of the French Alps, where they are being examined under a powerful CT scan at the European Synchrotron Radiation Facility.
The secrets of the embryonic dinosaurs whose parents roamed South Africa 200 million years ago are in the process of being hatched.

These high-resolution, 3D x-ray imaging methods are burgeoning in palaeontology. With advances in modern imaging methods we are now able to digitally remove rock matrix while making 3D models of the bones inside.

CT scans come to the rescue

The solution to all of these problems lies in CT scanning the specimen. The x-ray resolution needed to study the embryos is so high (six microns, or .006 mm) that only a few facilities in the world are capable of performing the study.

In late 2014, a team of us put together a winning proposal to scan the eggs at the European Synchrotron Radiation Facility in Grenoble. At the facility, a huge ring of electrons (almost a kilometre in circumference) traveling at .99% of the speed of light continuously generates beams of high-energy X-rays. These beams can be harnessed with great precision to peer through rocks and image the fossils inside.

Full story here
Posted by POTUS31.com at 1:30 PM No comments: Links to this post

Posted by POTUS31.com at 8:24 AM No comments: Links to this post